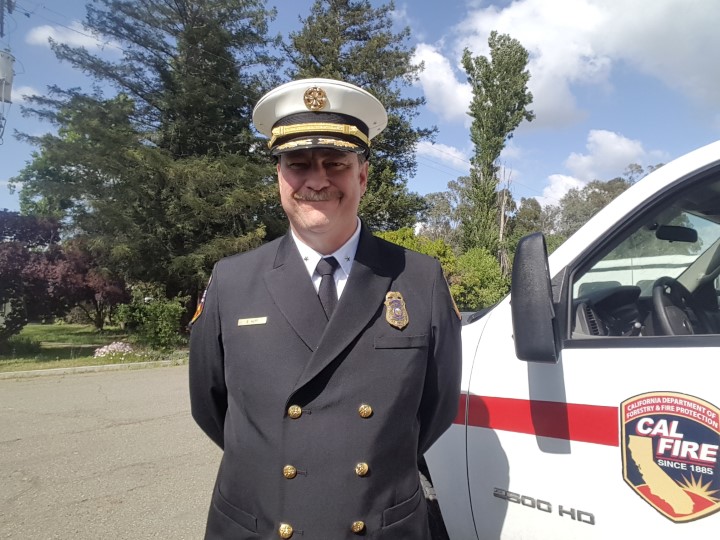 Alumnus Eric K. Huff (Forestry and Natural Resources, ’92) is one of those rare individuals with an instinct to serve. In Huff’s case, that service extends to his profession in forestry and to his close connection and generosity to Cal Poly.

At work, Huff is the staff chief of the Forest Practice Program at CAL FIRE headquarters in Sacramento, where he is responsible for administration of timber harvest permitting and watershed protection, among other duties. However, he considers himself a “forester,” first and foremost.

He’s come a long way from his “big plan” after high school to “keep working at the local gas station and playing music with a couple of friends. My parents thought I should aim a little higher -- probably because they’d listened to our band,” Huff joked. “With their help and encouragement, I was accepted into Cal Poly.”

Huff, a resident of Dixon, California, was accepted as a biology major but soon realized that he did not have the “ambition” to continue in that major. “I owe my start in forestry to a pal of mine,” he recalled. “I had no clue about the field of forestry until I arrived at Cal Poly.”

Following his friend’s advice, Huff took the Introduction to Natural Resources Management class. “My future major professor, mentor and friend, Doug Piirto, came into the class one day as a guest lecturer,” Huff said. “Dr. Doug was on loan from the U.S. Forest Service, and he walked into the classroom like a hurricane. He talked about natural resource careers and what it means to be a forester. I was hooked and made plans to change majors.”

Part of the draw for Huff was his love of being outdoors and his desire to understand the natural world. “To me, forestry is a beautiful melding of theory and practice, science and art,” he explained. “What I learned in dendrology class about tree identification, I was able to apply immediately in the field everywhere I went. The growing and harvesting of trees is made real as both an art and a science when I’m in the woods with a can of marking paint, selecting what trees to leave or harvest based upon what I’m seeing with my eyes and what I’m seeing with my mind’s eye as the forest stand I want to leave behind.” 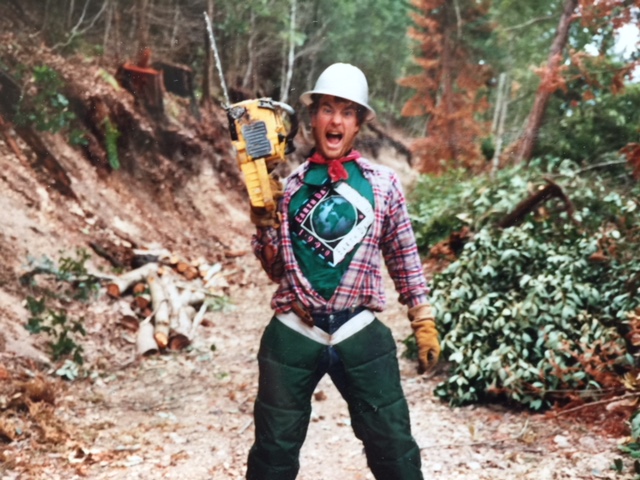 Eric Huff, Earth Day 1990, which coincided with the
first day of his internship at Cal Poly’s Swanton Pacific Ranch.

He began his career working for Big Creek Lumber Co. in Davenport, California, as a forestry technician doing fieldwork to support timber harvesting plans and operations and as a backup log scaler at the sawmill. After passing the Professional Foresters Examination in 1996 he was promoted to staff forester. “I continued to do fieldwork and write timber harvesting plans, mark timber and supervise logging operations,” Huff said. “I was promoted to chief administrative forester in 1999 and worked with the chief operations forester to supervise and administer the Big Creek Forestry Department.”

“The board is the quasi-legislative/judicial/policy body within CAL FIRE whose members are appointed by the governor,” Huff explained. “In 2011, I moved over to the uniformed side of CAL FIRE as a forester II. I was assigned to the board as its regulations coordinator, drafting regulations and policy at the board’s direction.”

During the ensuing years, he continued to rise through the ranks before accepting his current position as staff chief. “I went to work for the board overseeing the Professional Foresters Registration Program because I wanted to give something back to my profession and satisfy my longtime interest in forest policy and regulation,” Huff said. “I moved to the uniformed side of CAL FIRE because I felt like I was tapped out with policy and regulation work. I wanted to work in other aspects of public service forestry.”

My Cal Poly education gave me direction, ambition, relationships and the ‘tools’ necessary to make a go of my career choice. The Natural Resources Management and Environmental Sciences Department, the alumni and Cal Poly people are a big part of my story. I owe it to them to remain connected. The connection matters.

In his current role, he manages the Headquarters Forest Practice Program, overseeing three areas: Forest Practice Administration, Forest Practice Enforcement and Timber Operator Licensing, and Watershed Protection. “I oversee 21 positions among these three program areas and am fortunate to work with some amazingly talented and committed people,” Huff said.

“Navigating the tension between those who support active timber management and those who do not support it has been the biggest challenge of all,” Huff admitted. “I support active timber management, and I believe the choice of Californians to export the demand for wood products to other states and countries -- however intentional or unwitting it may be -- has contributed to a significant loss of primary manufacturing infrastructure and institutional memory. The need for sawmills, secondary wood-processing and energy-generating facilities, labor and equipment has never been greater. To me, this is the greatest challenge to our efforts to build lasting community and landscape resilience to wildfire effects.”

California’s wildfires present additional challenges and pose unprecedented risks, and while Huff said there are people with “far greater perspective than me” who can speak on the topic, he did say that “starting in 2017, fire ‘season’ stopped feeling like a season. That year it extended to December, and things haven’t changed since. The impacts to people and forests are beyond anything I ever thought possible. Forest resilience to wildfire is certainly foremost in my thinking about the practice of forestry these days.”

Huff said that Cal Poly’s Learn by Doing education has helped him throughout his career.

“My normal tendency is to second-guess my decisions and actions; to overanalyze before making a move,” he said. “The Cal Poly mantra has helped moderate that tendency in me and has given me the confidence to step into even the most unexpected of moments. To me, Learn by Doing means you are never unprepared to try. I’ve had the opportunity to do a lot of learning on the job. My Cal Poly education set me up well to embrace the learning, the failures, the successes and the personal growth that comes from all of that.” Perhaps that is why Huff remains strongly connected to the university. “My Cal Poly education gave me direction, ambition, relationships and the ‘tools’ necessary to make a go of my career choice,” he said. “The Natural Resources Management and Environmental Sciences Department, the alumni and Cal Poly people are a big part of my story. I owe it to them to remain connected. The connection matters.” 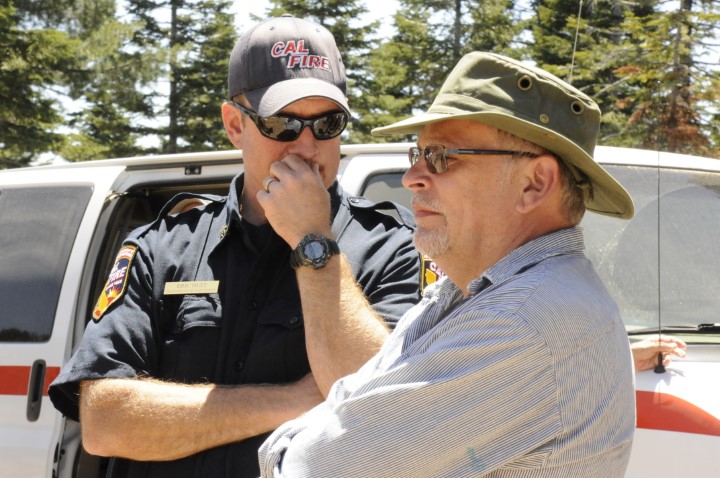 Huff’s wife, Kelly (Fitch) Huff, is also a Cal Poly alumnus (Agribusiness, ’96). The two met as interns at Swanton Pacific Ranch. “Our friendship began with a shared connection to Swanton, and that tie remains an important part of our story,” Eric Huff said. He also stays in touch, he said, because it gives him the opportunity to share what Cal Poly has meant to him, to be a resource for the students and to live up to the standard set by the department faculty and alumni who were a resource to him when he was a student. “I’ve seen a lot of generosity on the part of alumni, parents and those with affiliation to Cal Poly,” Huff said. “My parents started giving to the program even before I graduated. There is no question I would not be where I am in my life without the benefit of a Cal Poly education and all the amazing relationships that came with it. Giving back is just an attempt to count myself into the tremendous legacy started by many others.”

In addition to serving on Cal Poly’s Natural Resources Management and Environmental Sciences Department Advisory Council, Huff has promoted CAL FIRE seasonal and permanent job opportunities to Cal Poly students and alumni, and he and his wife have been continuing and generous donors to the university. “Eric and Kelly recently made a generous gift to support scholarships and student clubs in the NRES Department,” said Tim Northrop, senior director of development in the College of Agriculture, Food and Environmental Sciences. “In addition, he has historically been a consistent supporter of the logging team.” As a student, Huff was a member of the Logging Team for four years. “The NRES Department is grateful for Eric’s leadership, commitment and financial support of our students, clubs and teams,” Northrop continued. “His lifelong engagement with the department is a model for others to emulate.”

Huff intends to stay connected to Cal Poly and to keep supporting the department. “We need Cal Poly graduates out doing the work and solving problems,” he said. “There has never been a better or more important time for Cal Poly graduates to be engaged in the management of our natural resources. Staying connected means continuing on the path my Cal Poly mentors set me on and helping others find their own.”