Among Giants: Alumna Natalie Javier – from forestry student to forestry professional and mentor 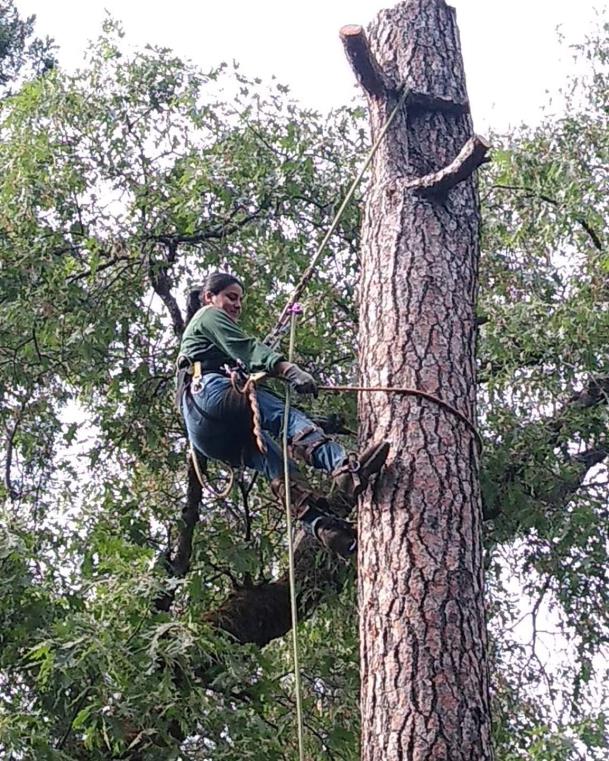 Cal Poly alumna Natalie Javier (Forestry and Natural Resources, ’19) is completely at home among the lush forests of Douglas firs and redwoods in Mendocino, California. Initially she studied biology at Cal Poly but had always been drawn to a career in the outdoors.

She found her calling to forestry after exploring the Natural Resources Management and Environmental Sciences Department’s videos and curriculum. After graduating in 2019, she worked a season with Cal Fire and was employed by Mountain G. Enterprises before landing a job as a forester at the Mendocino Redwood Co., where she has worked for almost two years.

Javier says that Learn by Doing is something she has carried over from Cal Poly into her career as a forester. In her first year on the job, while training under a registered professional forester, she learned how to classify waterway protection zones, identify unstable slopes and select the best sustainable forest management practices in preparation to write her own timber harvest plan. She says that her Environmental Impact and Resource Analysis classes prepared her well to write technical reports and implement plans.

Now she is helping train new hires in the field and is excited to be working on her first timber harvest plan. “I’m still learning, but it’s nice to ask your coworkers for advice,” she says.

When asked about challenges she has faced, Javier replied that until recently, she was the only female field forester in her office. According to software company Zippia, as of 2019, women made up just a little over 30% of the forestry workforce.

Javier describes how in her classes and at Society of American Foresters Club meetings, female guest speakers were especially rare. She noted that the lack of women speakers was primarily because those who do work in the industry are so busy with other responsibilities, it is difficult for them to make time for these events.

As a student, Javier was unsure about her career path even though she was passionate about her major. Once she got experience in the field, she realized “how much opportunity there is for young professionals.” She advises forestry students to dip their toes in by trying out seasonal positions and seeing if it is a good fit.

She says she would like to be more involved in mentoring students through Cal Poly’s Alumni Mentorship Program, “Mentor a Mustang.” In a heavily male-dominated field, Javier feels that “there aren’t a lot of people to look up to” for women in the timber industry. She hopes to help fill that gap and be a role model for other aspiring young foresters and encourage more women to claim their spot at the table.