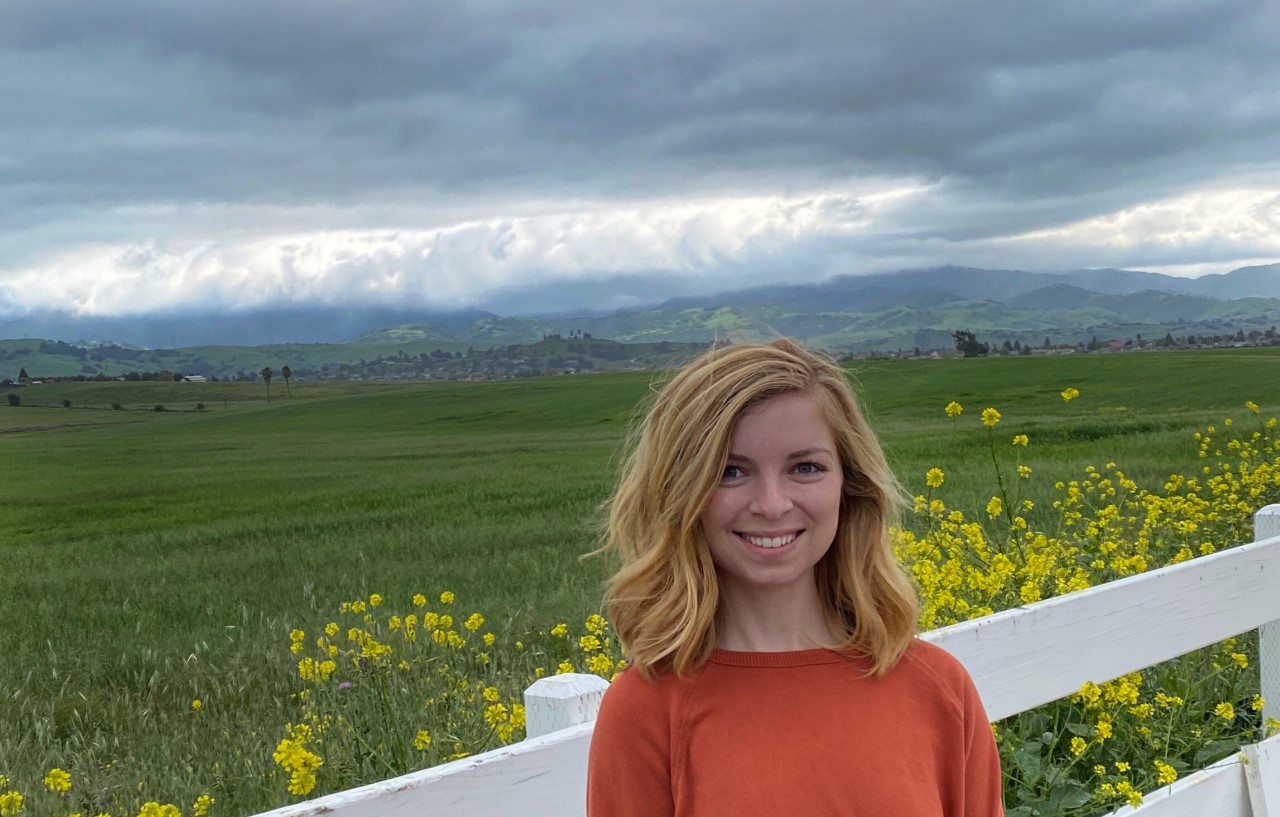 Shelby Littleton was awarded Student of the Year for the Environmental Management and Protection Major. Shelby’s hobbies include rock climbing, being outdoors, or really anything related to rocks and geology. She is a proud, self-proclaimed nerd who has also expanded her interests to outdoor gardening and painting. During Shelby’s time at Cal Poly, one of her most important undergraduate experiences was participating in the Summer Undergraduate Research Program (SURP). She was the only female who participated in that session and she said, “it was just really empowering! I gained so much knowledge, and it was also a lot of fun.” Shelby also told me about how impactful Dr. Antonio Garcia was in her experience at Cal Poly. “He just really sparked my passion for geology and rocks in general. I came into Cal Poly not really knowing what I wanted to do and him along with Geo 330 really cemented that passion of mine.” She also described how Cal Poly’s endless opportunities, the faculty and staff in the NRES department, especially the ladies in the office that she worked with, and her experience with SURP really supported her achievements. Shelby was also the president of the Environmental Sciences Club at Cal Poly, which she really loved doing.

When asked about what she would miss most about Cal Poly, Shelby said “I think I’ll miss the people the most. I met a ton of extraordinary people that helped me to figure out my path and be better during my time here. Also the scenic landscapes of SLO. It’s a really gorgeous area and I’ll miss living here.” Shelby’s advice to incoming freshman was, “Don’t panic about knowing exactly what you want to do! You have so much time to figure it out, you don’t need to have a specific plan. I failed a bunch of classes and it made me rethink what I’m doing. It’s not the end of the world!” Shelby’s short-term plans upon graduating in the spring are to, “Just get a job anywhere. I’m not picky at this point, but preferably environmental related.” We shared a laugh about that one, and when asked about the long-term, she said she would be applying to grad school this whole year, however is unsure of what programs. “My hope is to get a masters in geology and then professional geologists license.” Shelby shared some final thoughts saying, “I’m just so shocked and honored to have won, and I’m really excited to be graduating!” 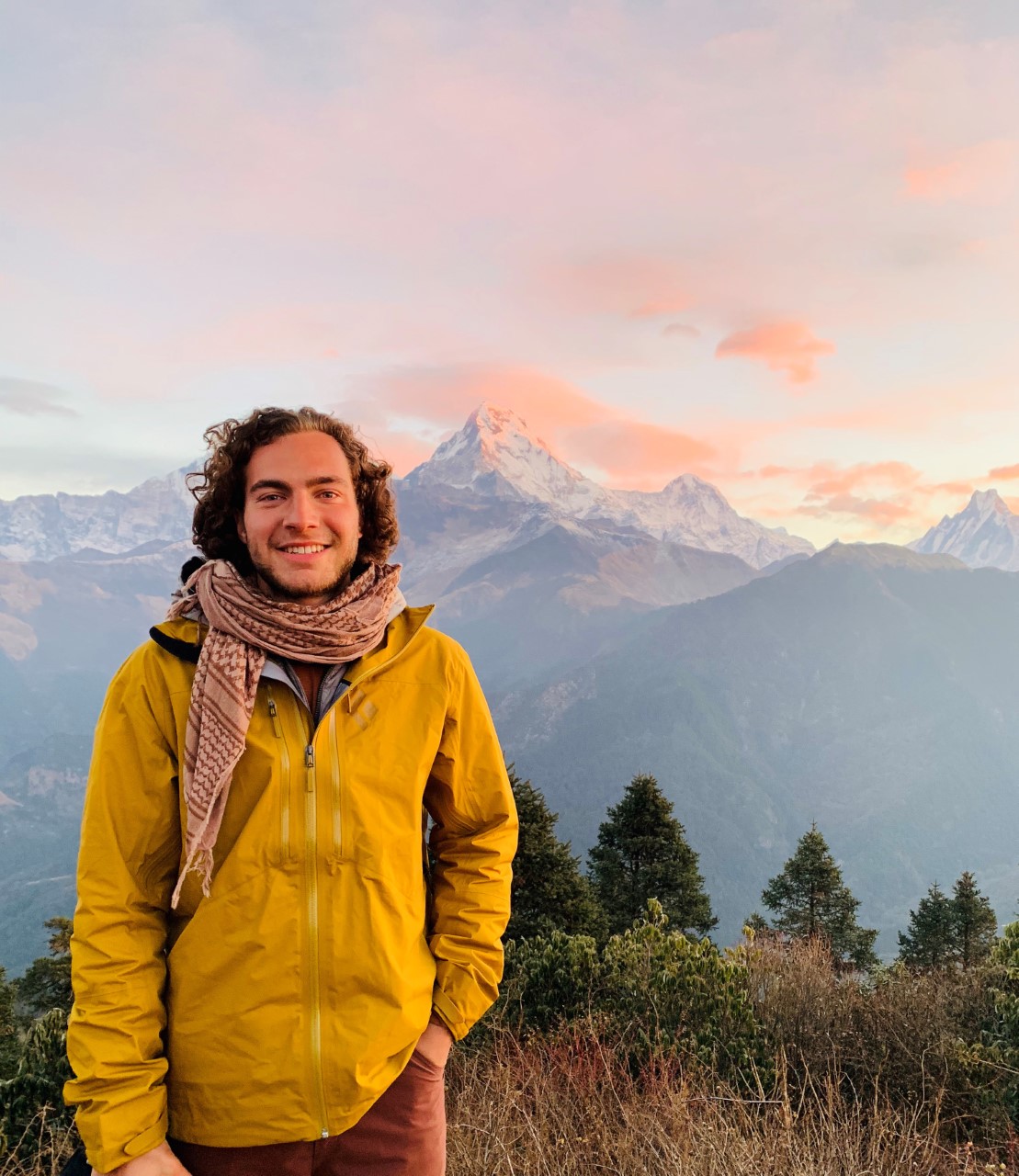 Zach Raposo is the Student of the Year for the EESS major within the NRES Department. Zach’s hobbies and interest are anything that lets him be outside such as biking, climbing and backpacking; adding on he is a bit of a travel junky as well. During quarantine, Zach has expanded his interests to create a succulent garden in his backyard. During his time at Cal Poly, Zach says his most important undergraduate experience was meeting Dr. Nishi Rajakaruna who is a professor in the biology department. “He introduced me to so many different restoration topics such as phytoremediation and he constantly pushed me to be the best student I could be.” said Zach about Dr. Rajakaruna. Zach worked on a fire research project under Rajakaruna’s mentorship for three years studying the use of fire retardant on edaphic substrates such as serpentine and its influence on plant biodiversity. Zach mentions that Dr. Rajakaruna “has been a pivotal role in my success as an undergrad and likely beyond.”.

His favorite class at Cal Poly was soil and water chemistry which he took with his most impactful professor, Dr. Chip Appel. “His ability to teach really complex subjects in a simple and efficient way is what I appreciated most.” Zach said about Dr. Appel. Zach says Cal Poly supported his achievement of this award by being his biggest fan for his entirety of his undergrad career. “My thanks goes out to everyone in the NRES and COSAM Departments, and Bill and Linda Frost to allow me to carry out my research” said Zach about how Cal Poly supported him during his time as an undergrad. When asked about what he will miss most about Cal Poly, Zach said “Surprisingly the fifth floor of Baker Science, where you could always count on getting help from professors or other students jazzed up on coffee. This includes everything from help on a homework problem to emotional support. You could always count on Dr. Malama for a good laugh. The relationships and community I have formed over the years will be what I’ll miss the most.”.

Raposo’s advice for entering freshman are to “Be open minded, it’s college and you’ll be experiencing so many new ideas and perspectives. Speaking to understand and not to be understood has been a key to my learning during my undergrad.”. Zach’s short term plans upon graduation are to bike the Sierra Cascade route with his friends. The route goes from the border of Canada down to the border of Mexico hugging close to the Pacific Crest Trail. When asked about his long term goals, Zach said “Lately, I’ve been interested in sustainable agriculture. Moving forward, food security will be a serious threat and I would like to expand on our knowledge of sustainability to help manage our food.”. Raposo added in a few words to his fellow Cal Poly family, “With this whole Corona Virus going on, I hope we can all find a way for this to strengthen our bond and hope we are all safe and healthy during this time.”. 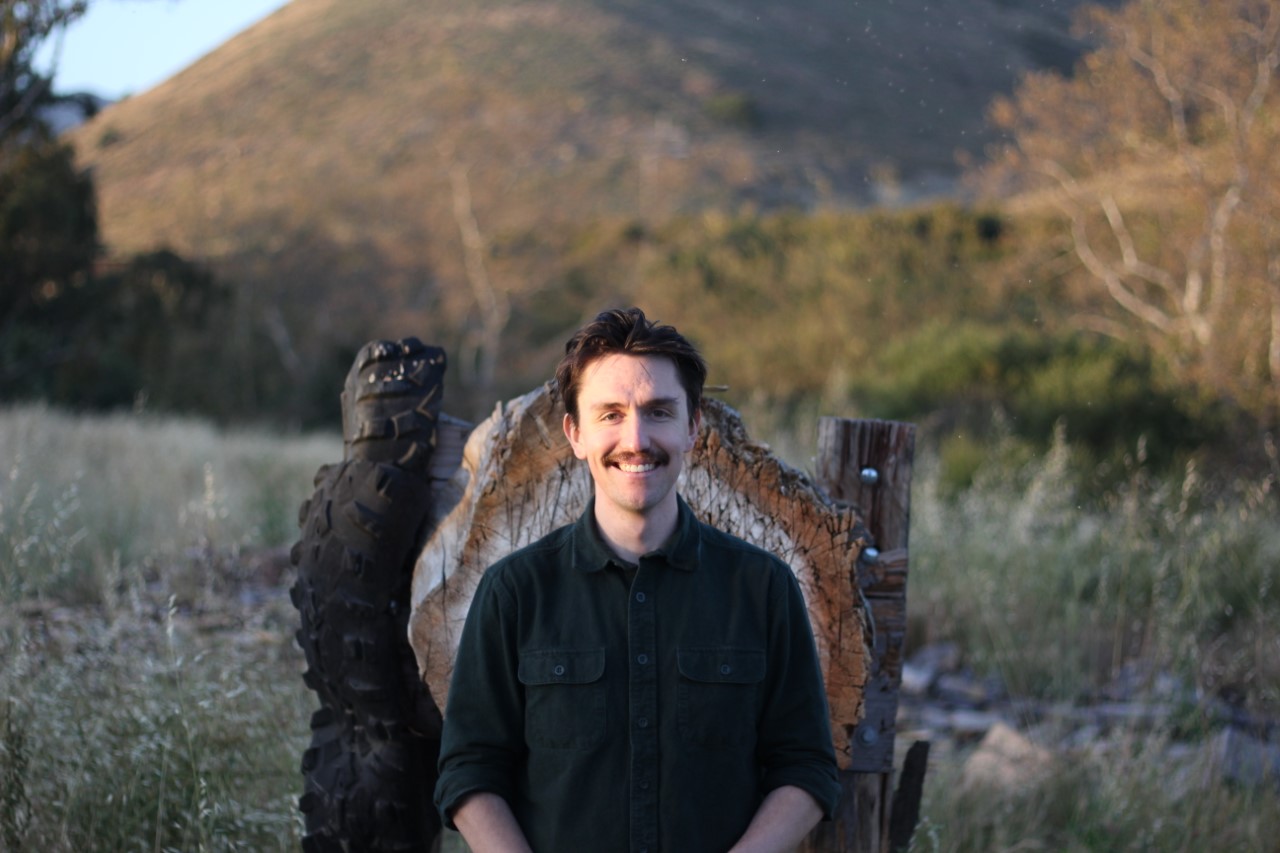 Zane Cooper is the Forestry and Natural Resources (FNR) student of the year. Zane was an officer or involved in multiple Cal Poly clubs including the Society of American Foresters, the logging team, and the Student Association of Fire Ecology. He also worked as a firefighter for CalFire and was an NRES TA. Even with all his classes and school related extracurriculars, Zane still has time to enjoy his hobbies of playing guitar, ukulele, and even a little piano. The ability to balance all of this along with earning the respect of his peers and professors alike has earned him the well-deserved honor of the FNR student of the year.

When asked what his most important college experience has been, he replied with his trip to Yellowstone National Park for North American Dendroecological Field Week where students were able to conduct research on lodgepole pine. “This weekend was fun and made me realize I want to do long term research,” he said. His undergraduate experience was also enhanced by amazing professors, especially Maurica Fitzgibbons who “is the most impactful professor to me because she’s very driven to get students into the field and get them hands on experience.” Although Zane was a transfer at Cal Poly his advice for all incoming students would be “to get involved with clubs and activities but don’t overload yourself.”

When Zane graduates he is moving to South Lake Tahoe to start a field research job with UC Davis, the University of Nevada, Reno and the Forest Service assessing fire ecology in the area. When that research is done he plans to pursue graduate school for forestry. 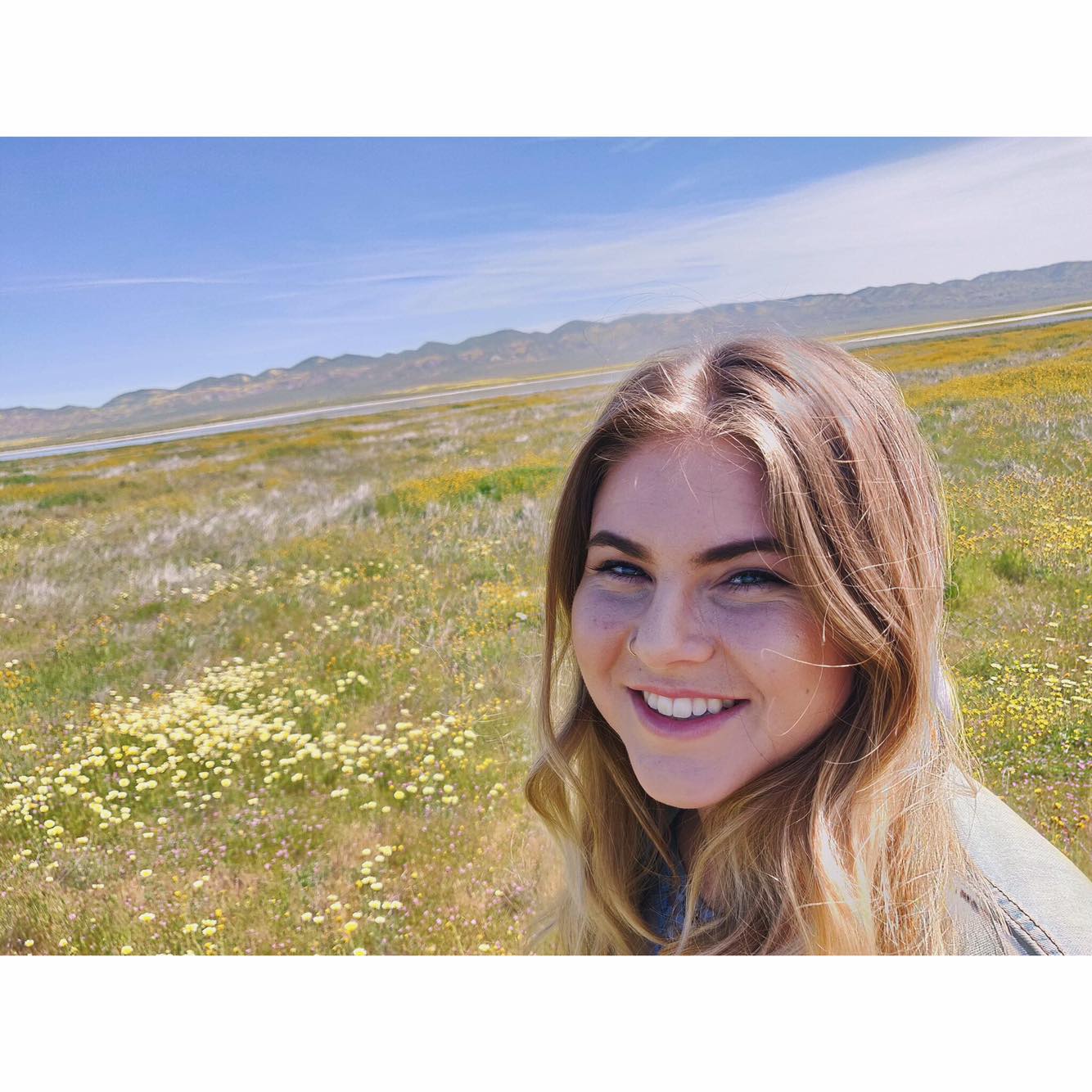 Meet Erin Lucett, the 2020 Masters in Environmental Science and Management student of the year. Erin is also a 2018 NRES alum from the Environmental Management and Protection undergraduate program. Erin’s hobbies include hiking and spending time outdoors, and with the recent quarantine she has been especially engrossed with making things from scratch like bread and beeswax wraps for food preservation.

Her most impactful experience at Cal Poly was study abroad in Taiwan with NRES professor Dr. Yiwen Chiu. She commented that “just going into a different area and seeing a completely different culture and how they approach environmental issues and what people's actual concerns are helped me understand that the environment isn't just one thing, and you can't do environmental management without thinking about people.”

Erin’s Master’s project focused on public participation in disaster mitigation in Cambria. She evaluated the public’s management preferences regarding forest health treatments for mitigating wildfire, implementing a survey to gather opinions so that agencies understand public sentiment. Her short-term plans are to land a job that offers her new skills related to environmental management. Long-term she envisions working as a consultant for businesses to lower their environmental impact. She credits the systems dynamics and life cycle analysis skill she learned in Dr. Chiu’s classes for giving her the confidence and drive to work in this arena. Her advice to incoming students is to get involved early and often with faculty projects and research. She commented that “working on research projects motivates me to get my schoolwork done and be more efficient with my time and I feel like I'm doing something more meaningful on top of my schoolwork.” She noted that the M.S. program was an ideal culmination of her Cal Poly experience, stating that “The graduate program has really helped me put it all together and feel confident in my skills and my abilities to go out into the workforce.”

She said that she’ll miss the people of Cal Poly, especially her M.S. cohort and feels that “our little group has just been really awesome and supportive. The relationships that I've made through that have been amazing. And hopefully, we'll have lifelong friends from that.”